Over 25,000 pounds of fresh produce donated in Arthur 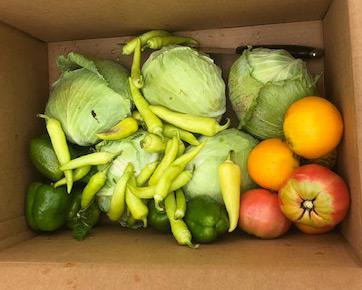 The Partners in Produce program at the Arthur Produce Auction took place twice per week during the 2019 summer growing season. Began by SNAP-Ed, this program brought fresh produce readily to families in need living in the area. Produce buyers voluntarily donated a portion of their purchases during each auction to the program. In addition, growers frequently gave extra produce instead of selling it at a loss. SNAP-Ed team members helped ensure transportation to the locations receiving the donations. During several auctions, the program received over 3000 pounds of donated produce in one day. A total of 25,285 pounds of produce was donated and distributed during the growing season.

Produce was donated to 22 food pantries in the area and one summer feeding program for students out of school in Windsor. In addition to the donated food, all pantries received nutrition education, encouraging pantry clients to choose and prepare the produce at home. Windsor Grade School receives nutrition education for students during the school year and received a lunchroom makeover through a partnership with SNAP-Ed.

The impact of Partners in Produce goes beyond the summer. During sweet corn harvest, 500 ears of corn were donated to Windsor School District, where >90% of students are eligible for free or reduced school lunch. The school district froze the corn for later use during the school year and it was used at meals for the entire school in three separate meals.

Though the summer season has come to a close, this initial year of Partners in Produce has set a firm foundation to continue to better serve families in need for the future.